Myoelectric prostheses have recently undergone extensive developments in their complexity and movement patterns, yet controlling these devices remains a challenge, and commercial devices lack sensory feedback. We are working on several areas to improve control and feedback from prosthetic devices. 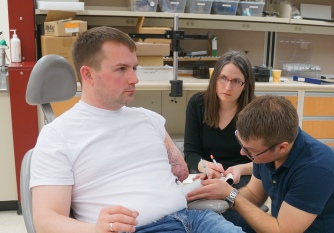 Dr. Hebert instituted the first team in Canada performing the Targeted Reinnervation procedure for upper limb amputation, which has been performed in Edmonton since 2008 with a coordinated interdisciplinary team. We have an ongoing active clinical and research program for targeted reinnervation, supported by the Glenrose Rehabilitation Hospital. With surgical reinnervation, patients have more signals … END_OF_DOCUMENT_TOKEN_TO_BE_REPLACED

There are no commercially available myoelectric prosthetic systems that provide sensory feedback. This means that the user does not know if they are contacting an object or how hard they are squeezing, which can make accurate control of the device challenging. A tactile feedback system is being developed that will provide touch information directly … END_OF_DOCUMENT_TOKEN_TO_BE_REPLACED 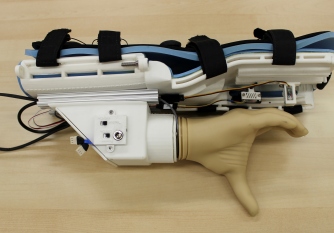 We have developed a simulated sensorimotor prosthesis for testing using able bodied subjects. The simulated prosthesis provides the experience of using a myoelectric device to someone with an intact arm, as well as provides sensory feedback for touch and grasp. This allows us to test various devices, control, and sensory feedback back strategies in … END_OF_DOCUMENT_TOKEN_TO_BE_REPLACED